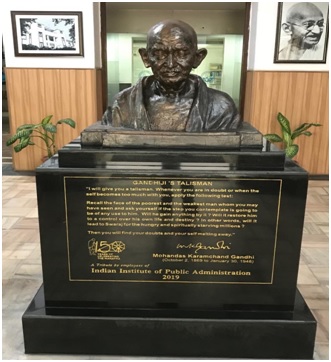 Indian Institute of public Administration (IIPA) is privileged to pay its heartfelt tribute to our Father of Nation on his 150th Birth Anniversary in 2019, by installing a bust statue within premises of the Main Campus. The uniqueness of this initiative is the statue designed and crafted by Padmshree & Padma Bhushan Ram V Sutar. Shri Ram Sutar works with ease and mastery in bronze. He has mastery in realistic sculptures and has been recognized by various countries and Artists from all over the world. His Sculpture of Mahatma Gandhi has been installed in two fifty different countries. His bust of Mahatma Gandhi has been highly appreciated and has been selected for installation in many foreign countries. The statue was unveiled by Padma Bhushan Sri Triloki Nath Chaturvedi on 1st July 2019 in the gracious presence of dignitaries and faculty/officers of IIPA.

IIPA in the past has organised a series of seminars, workshops and lecture series on life and times of Mahatma Gandhi in addition to research projects. The vision of apostle of peace are universal and are relevant for people of all ages, civilisation and geographies. Gandhi and Gandhism is more relevant today than in 1869 when Gandhi was born, or in 1919 when he entered in political arena, or in 1948 when he took the final journey with Hey Ram. Gandhi is not a person who walked and blessed India as the father figure but Gandhism has inspired millions of thought leaders and billions of minds with his eternal values of – Ahinsa – Non-Violence and Satyagrah – adherence to truth. 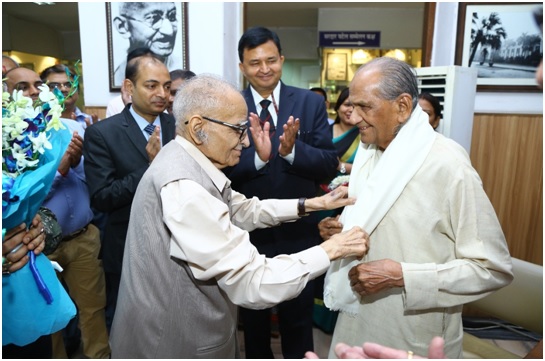